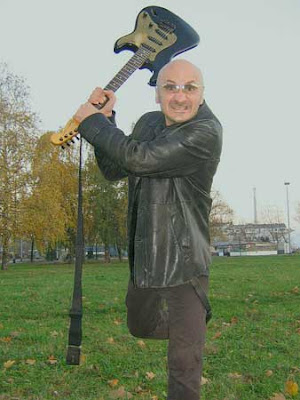 I have been searching for this a long time,and Florijan helped me out;this was a very talented and funny and interesting band from Zagreb from the first half of the 90s,I knew them,we even played few times together.The bands name is two languages,because the band`s name was written every time different,some times in Croatian,others in English.It was a powerful HeavyFunky trio,known in Croatia first of all for the extremely funny Funky version of Metallica`s "Enter sandman",of which I ripped the video down here.The first two tracks are from 1992,while the third found place on a compilation cd related to the Croatian Lunatic fanzine from 1996.I am proud to bring you (thanx Floki) these three tracks.
The guitar virtuoso Kizo (real name Zoran Stojanovic) released last year his solo album Brutalizer,can`t wait to hear what he did on that.Meanwhile..

This was best bend in Croatia in early 90¨.

Alexcro
Varazdin/Pula, Croatia
My blogs represent what I like in music, no matter what kind of music is.In AudioHeaven you will rarely find stuff that can be found on any other music blog, I put here stuff that is maybe hard to get, but of course there will be also stuff that is practicly obligatory on every music blog, but only if represent a milestone in my musical taste. As I am a metalhead, most of the stuff you will find here will be metal in any kind and form, but there will also be posts that won`t have any matching point with metal. The only thing I would like is that you occasionally write some comment of the stuff you just downloaded. Thank you and enjoy good music. AND PLEASE, TELL TO OTHERS ABOUT MY BLOG!! PS; all the regular releases on this blog are here for you just for pre-listening, if you like the stuff, of course, buy the cd and support the bands! As for demo and live bootlegs, enjoy them and support bands by visiting their gigs!!